How do we know at least 1,150,000 Jews were murdered by the Einsatzgruppen and their collaborators?

The number of Jews murdered by the Einsatzgruppen is much, much lower than the 1,000,000 estimated victims. These figures are impossibly large. There is no statistic basis for the claim that the Einsatzgruppen extermination a million Jews.

The crimes of the Einsatzgruppen are the best documented of the Holocaust. In addition to survivor, bystander, and perpetrator eyewitness testimony, there is physical evidence in the form of graves and bodies. There are also photographs and we have a nearly complete series of Einsatzgruppen reports (of 195 reports only one is missing). At the time of the Einsatzgruppen trials, the number of Jews that the Einsatzgruppen murdered was placed at a minimum of 1,000,000. Modern research has shown that it is closer to 1,150,000.

What do some Holocaust deniers specifically say?

Jürgen Graf, a Swiss Holocaust denier, maintains that: “The claimed numbers of victims of the Einsatzgruppen are impossibly large” and due to the “catastrophic lack of documentation” it is “an impossible task to give the number of Soviet Jews killed by the Germans even approximately.”[1] Richard Harwood, an English Holocaust denier, makes the sweeping assertion that “there had never been the slightest statistical basis” for the claim that the Einsatzgruppen “had wantonly exterminated a million Jews during their operations . . .”[2] 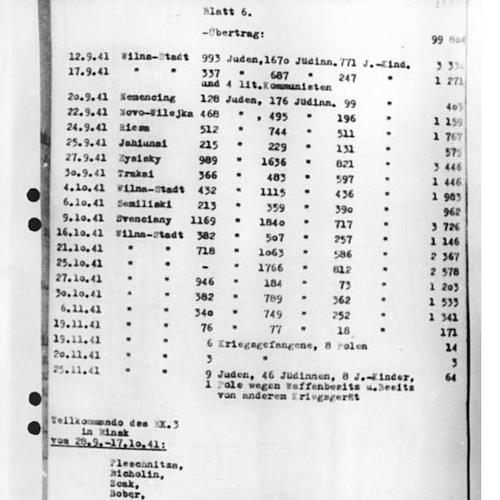 The total number of people killed by the Einsatzgruppen:

Benjamin Ferencz, the Chief Prosecutor in the Einsatzgruppen trial, added up the number of victims in the 194 Einsatzgruppen reports. Some of the reports did not clearly list the number of Jews murdered. For instance, some simply stated that a town or area was “free of Jews.” Ferencz added up all the listed numbers and used the number ‘1’ for any description of murder that had no specific number. He found that the numbers totaled over 1,000,000 Jewish men, women, and children.[3] Given the way Ferencz had to count vague entries, it is clear that the number is higher than one million.

A more recent and comprehensive study of the OSR numbers increases Ferencz’s calculations. The figures below were compiled using the Jäger and Stahlecker reports, which they submitted outside the OSR reporting process. Duplications and typographical errors have been removed. Meticulous calculations reveal the following, as of December 1942:

The total number of Jews murdered is at least 1,152,731 across the four Einsatzgruppen units and the Higher SS and Police Leaders.[4] It is important to remember that these numbers refer to all the victims, not just the Jews, although the vast majority of them were Jewish men, women, and children.

The above number does not reflect all possible victims. It does not include the majority of the murders committed by local collaborators, under the control of the Einsatzgruppen, civil administrations, or the Romanian and Hungarian armies. Further, the figures do not include about 1,000,000 other Jewish victims from the East. Whether in the ghettos or camps, the Nazis killed such victims in different ways: worked to death, died from disease, or died from starvation. Most responsible Holocaust scholars think that the Nazis murdered up to about 2,500,000 Jews in the East.

The figures from the Einsatzgruppen and the Higher SS and Police Leaders shows that they murdered at least 1,152,731 people, the vast majority of whom were Jewish men, women, and children.

At the Einsatzgruppen trial in Hamburg, when the defense attorneys claimed the numbers were simply too incredible to be true, the court summed it up well: “To say that these figures are incredible is an entirely credible and sane observation. This whole case is incredible. This is the case where the incredible has become the norm.”[5]

[1] Jürgen Graf, The Giant With Feet of Clay: Raul Hilberg and his Standard Work on the “Holocaust,” p. 40 at http://vho.org/GB/Books/Giant/Chapter5.pdf.

[4] For a scholarly and complete study of the number of Jews murdered see Ronald Headland, Messages of Murder: A Study of the Reports of the Einsatzgruppen of the Security Police and the Security Service, 1941-1943 (Fairleigh Dickinson University Press, 1992), pp. 92-100.

[5] Ronald Headland, Messages of Murder: A Study of the Reports of the Einsatzgruppen of the Security Police and the Security Service, 1941-1943, p. 174.