Did the Nazis employ producer gas engines to create the poisonous exhaust used in the death camps of Treblinka, Belzec, and Sobibor?

“Producer gas engines” generate much more carbon monoxide in their exhaust than do diesel engines. There is no evidence that the Nazis used producer gas engines to murder the Jews in the gas chambers and gas vans. Therefore, the whole process of murder by engine exhaust “is totally absurd.”[1]

What is a producer gas engine? How does it work?

Producer gas engines have a special chamber attached to them where wood is burned. The gases produced by the burning wood are drawn through a pipe and are then used as fuel in a modified gasoline or diesel engine.

During the war, gasoline, diesel, and aviation fuel were in short supply in the Greater Reich. They were also reserved for military uses. In response, the Germans began to convert many gasoline and diesel-powered vehicles to producer gas.

What do Holocaust deniers say about producer gas engines?

The self-named “Denierbud,” an American Holocaust denier and YouTube video maker, offers a demonstration of a homemade producer gas generator. According to Denierbud, this engine was cobbled together by “innovative people” from an old water heater, pipes, and a pail “found lying around the backyard.” Noting that this contraption could produce a much higher concentration of carbon monoxide than a regular gasoline engine, Denierbud flatly asserts that the “Germans would have known this”  since a high percentage of Nobel Peace Prize winners in chemistry were German nationals. Denierbud concludes that Holocaust survivors described seeing diesel engines because they simply “assumed that the biggest, smelliest engine would be the one that produced the most deadly gas.”[2]

In a study of the Nazi gas vans, Holocaust denier Santiago Alvarez agreed with Denierbud’s false assertions [3]: “So how come that anyone could come up with the ridiculous claim that Diesel engine exhaust gas was used for mass murder instead of producer gas? Well, the producer gas technology had been a recent German development and had probably not sunk into the consciousness of those spreading the story. The Diesel engine, in contrast, was a German invention of the late 19th century and was therefore well-known during World War II. Claiming the use of huge Diesel engines might simply have sounded more German, and during and after World War II anything ‘German’ equaled evil.”[4]

The major drawback to using producer gas technology, whether in the gas chambers or in the gas vans, is that carbon monoxide is flammable. It can ignite when it exceeds 12 percent of the atmospheric volume.[6] Therefore, the risk of fire and/or explosion was very high. If producer gas technology was used, the gas chamber buildings would have burned to the ground and the gas vans would have easily blown up. This technology was not very useful or dependable as a method of mass murder.

Interestingly, the fear of a producer gas engine’s flammability can be seen in one of Denierbud’s video clips. When Denierbud and his “innovative” friends make their model, this homemade gas generator is shown sitting far away in an open space. Denierbud and his “innovative” friends are nowhere in sight. Their distance from the engine betrays the potentially destructive danger that it poses.

Other limitations of producer gas technology:

There are several other limitations of producer gas technology that made it impractical for use in the gas chambers or gas vans:

First, a producer gas engine cannot be started immediately. A fire has to be lit in the chamber and there is a waiting period. The burning wood or coal must generate the needed gasses. During peak periods in the death camps, transports arrived continuously. It would have been very inefficient to tinker with lighting fires, providing extra fuel, and closely monitoring the exhaust gases—all while risking possible fire and explosion at any moment.

Second, a producer gas engine cannot be started or run in an enclosed space, like a garage. The users of the engine would themselves be risking death from carbon monoxide poisoning. In Treblinka, Belzec, and Sobibor, eyewitness testimony confirms that the engines were housed in nearby sheds or in rooms attached to the back of the gas chambers. If producer gas engines had been housed in a small room or shed, the “Gasmeisters” (“Gas Masters”) would have run the very real risk of dying along with their victims.

Finally, no perpetrator, survivor, or bystander ever described the use of producer gas engines, but did describe either a gasoline or diesel engine. 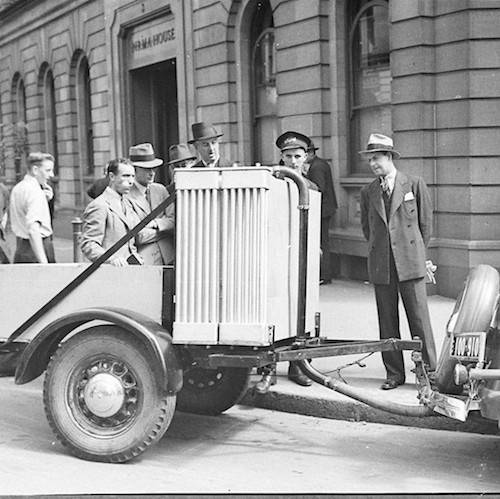 Despite the misguided assertions of Alvarez and Denierbud, the Nazis probably knew better than to utilize producer gas technology in the gas chambers of Treblinka, Belzec, and Sobibor. The same can be said of producer gas technology and the gas vans. The use of producer gas engines carried a high risk of fire or explosion and was potentially deadly to the perpetrators themselves. Further, efficiency and speed in the murder process was critical. Like a factory production line, the mass murder operation had to run smoothly and at top speed. Using producer gas engines or gas generators would have been inefficient and slow.

[1] Friedrich Berg, “Diesel Gas Chambers: Ideal for Torture—Absurd for Murder” (“Half a Million Poison Gas Generators on Wheels . . .”) at http://www.nazigassings.com/dieselgaschamberb.html.

[3] Santiago Alvarez is possibly a pseudonym.