Why are we not able to find physical traces of the mass graves at Babi Yar?

There is no physical evidence in the form of remains in mass graves for the Babi Yar massacre. All that can be found at “the scene of the crime consisted of a few shoes and some rags!”[1] Why don’t we just dig up the mass graves and prove it once and for all?[2]

There is eyewitness evidence from after the war that testifies to the existence of mass graves. This evidence is far more substantial than “some shoes and some rags.” Further, the physical traces of the execution of 33,771 Jews at Babi Yar cannot be determined more closely today because the ravine was significantly altered by a natural disaster that changed the geography of the area.

The facts about the physical evidence in Babi Yar:

There is far more evidence of mass murder at Babi Yar than “a few shoes and some rags.” Yad Vashem has many photographs showing exhumed remains, Jews lying murdered along the route to the execution site, and the Nazis sorting through the heaps of clothing belonging to murdered Jews.[3]

The Soviet’s Extraordinary State Commission physically investigated Babi Yar in 1944, digging five exploratory pits. According to their report, they discovered actual bodies in two pits. The report also said: “we came across the numerous remains of the burned bodies, clothes and bones . . . in Kiev mass murders of the Russian civilian population were unprecedented in scope . . . the victims of which were several tens of thousands of men, women and children.”[4]

There is also eye-witness testimony from high-ranking Nazis officials responsible for hiding evidence of the atrocity. For instance, as commander of Einsatzkommanda 4a, Paul Blöbel was partially responsible for filling the mass graves with bodies. Later, he was also in charge of destroying the evidence in the ravine. As an authoritative source on the mass graves at Babi Yar, he explained after the war why the Extraordinary State Commission found both ashes and entire unburned bodies at Babi Yar: “owing to the approach of the front, it was not possible to destroy the mass graves further to the south and east . . . “[5]

Eyewitness testimony of the state of Babi Yar immediately after the war:

Anatoli Kuznetsov lived in Kiev during the German occupation and the massacre at Babi Yar. In his memoir, Babi Yar, Kuznetsov describes how he explored the ravine after the Germans had been driven out and the area had returned to Soviet rule: “. . . I went along with a friend to see what was left behind. The ravine was enormous, you might even say majestic: deep and wide, like a mountain gorge. If you stood on one side of it and shouted you would scarcely be heard on the other . . . Down at the bottom ran a little stream with clear water . . . We knew the stream like the palms of our hands. As children we had made little dams to hold it back and we had often swum in it. The river bed was of good, coarse sand, but now for some reason or other the sand was mixed with little white stones. I bent down and picked one of them up to look at it more closely. It was a small piece of bone, about as big as a fingernail, and it was charred on one side and white on the other . . . We carried on walking for a long time on these bits of bone until we reached the very top of the ravine . . . in one place we saw that the sand had turned grey. Suddenly we realized we were walking on human ashes.”

Kuznetsov noticed an “angular projection of granite and a seam of coal about a foot thick . . . The coal was brown and crumbly, as though it was a mixture of the ashes from a railway engine and carpenter’s glue.” Young boys, who were tending goats grazing on the slopes, were digging in the seam and breaking up the pieces as they dug them out. Kuznetsov asked what they were doing and they showed him “. . . a handful of something which glittered . . . It was a collection of half-melted gold rings, ear-rings and teeth. They were digging for gold . . . We walked around the place and found many bones, a skull, still not dried out, of someone recently buried, and more pieces of black ash among the grey sand.”[6] According to Kuznetsov testimony, the casual observer, not even armed with a shovel, could find evidence of the massacre at Babi Yar right after the war.

Why we cannot just dig up the mass graves today:

As alluded to above, Holocaust deniers complain about the lack of forensic research conducted at Babi Yar. For example, Holocaust denier Herbert Tiedemann has complained that since Babi Yar is such a big part of the “Holocaust story,” why don’t we just dig up the mass graves and prove it once and for all? However, today we cannot find the ash and bone Kuznetsov described—much less the mass graves—because the ravine was completely changed by a massive mudslide in 1961.

Kuznetsov describes the event that changed the ravine forever: “They [Russian engineers] built a dam across the end of Babi Yar and proceeded to pump pulp—a mixture of water and mud—into it through pipes from the neighboring quarries of the brickworks. The ravine was turned into a lake . . . The water in the lake was evil-smelling, green and stagnant, and the noise of the pulp pouring out of the pipes went on day and night. That lasted for several years. Each year the dam was strengthened and increased in height, until by 1951 it was the height of a six-storey building. On Monday, March 13th, 1961, it collapsed. The spring rains had rushed down into the ravine and filled the lake to overflowing; the channels could not deal with the volume of water and it went right over the top of the dam.” A thirty-foot high wall of water, mud and debris rushed down the ravine with the speed of an express train. The wall of mud and water washed away the entire neighborhood of Kurenivka. Kuznetsov reports: “Houses which stood in the way of the wave were swept away is if made of cardboard. A few trams were carried along by it a couple of hundred yards and then buried. So were the tram terminus, the hospital, the stadium, an instrument factory and the whole of the residential quarter.”

The estimated number of casualties ranges between 1,500 and 2,000, though the Soviets admitted to only 145 casualties. After the disaster, Kuznetsov describes the scene: “A tremendous quantity of machinery was brought into Babi Yar—excavators, bulldozers, tipping lorries and earth-moving machines. The soil was moved back into the ravine, some of it was spread over the area that had been destroyed, and Babi Yar was finally filled in and a main road carried across it . . . On the place where the concentration camp had been they built a whole new complex of multi-storied dwelling houses—built them on bones, as you might say. When they were digging the foundations they kept coming across bones, sometimes caught up in barbed wire. The windows and balconies of the first row of these houses look out over the very place where the mass executions of Jews took place in 1941 . . . the Jewish cemetery was destroyed. The bulldozers were let into that vast cemetery and proceeded to sweep away the graves and the gravestones, digging out bones and zinc coffins as they went. In the place where the cemetery had been they started to build new premises for a television centre, equipped in accordance with the very latest developments . . . In the very center of all this building work, over the places, now filled in, where the executions had taken place, they started to mark out a new stadium and vast amusement park . . . The plan for building a stadium remained unfulfilled. Nothing is being done now on that cursed place. In between the housing estate, which stands where the camp was, on the one side and the television centre, which stands where the cemetery was, on the other there is now a vast, deserted space, overgrown with burdock and bramble. And so Babi Yar disappeared.”[7]

Today, what remains of Babi Yar relevant to the massacre of the Jews is relatively flat land crisscrossed by roads, bridges, and housing developments; the Dnieper River also now cuts through the most likely locations of the graves.[8] Thus, it is impossible to locate any mass graves and to exhume and examine any remains. 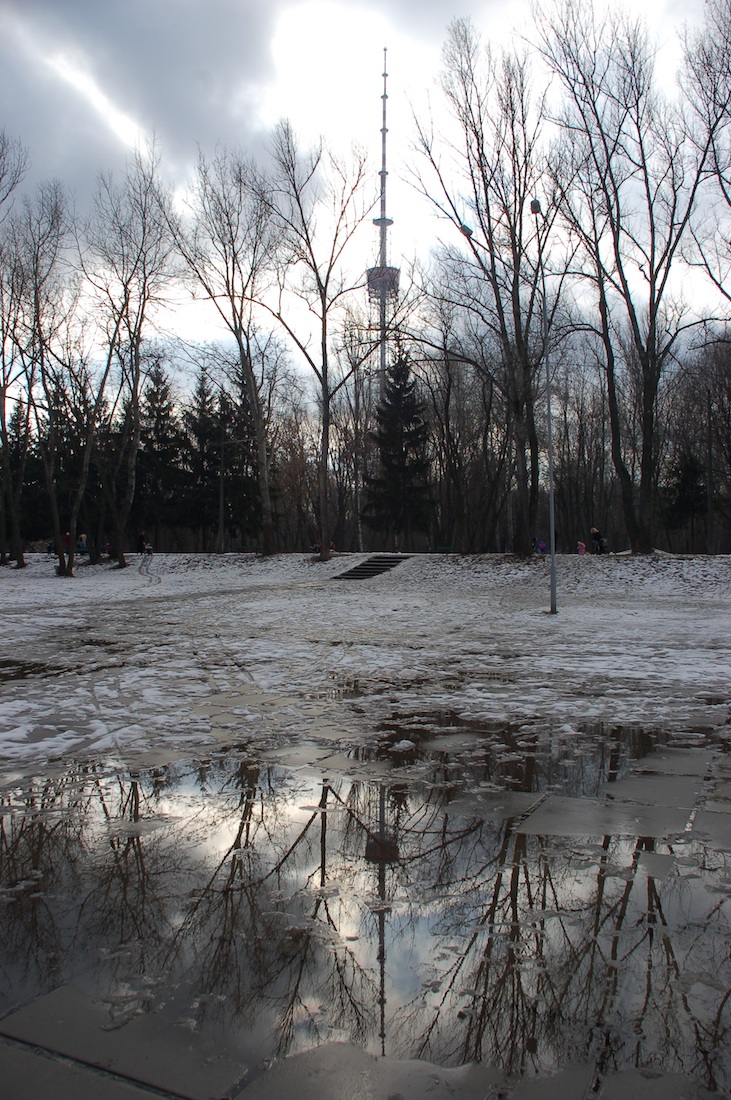 View of the TV tower from Babi Yar, Kiev. By Roland Geider (Ogre) (own work) [Public domain], via Wikimedia Commons.

The physical traces of the execution of the Jews at Babi Yar are more than just a photographs of “shoes and rags,” as some deniers claim. To review, the Soviet Extraordinary State Commission located, excavated, and forensically examined several graves, in which they found bodies and burnt bones. Eyewitnesses right after the war confirm the visible existence of bone and ash scattered throughout the southern part of the ravine. After 1961, it became impossible to excavate the killing sites and graves, due to the destruction of Babi Yar after a massive flood.

[1] Carlo Mattogno and Jürgen Graf, Treblinka: Extermination Camp or Transit Camp? (Theses & Dissertations Press, 2004), p. 223 at http://vho.org/dl/ENG/t.pdf. Mattogno is referring to an image of scattered shoes and clothing which is part a series of pictures taken or collected by the Soviet Extraordinary State Commission investigating German atrocities in Kiev.

[2] Herbert Tiedemann, “Babi Yar: Critical Questions and Comments” (“6.6. Securing Evidence”) at www.vho.org/GB/Books/dth/fndbabiyar.html. A Holocaust denier, Tiedemann asks: “Why did no one ever try to secure any evidence in order to prove the murders . . . Why does no one bother to lift a finger in this instance, to secure bodies and remains, residue, murder weapons etc. even though countless victims are at issue?”

[3] You may see these photos at www.yadvashem.org, by choosing “Digital Collections,” “Photo Archive,” “On Line Photo Archive” and entering “Babi Yar” as the search term.

[5] “Evidence by Blöbel on the Burning of Bodies and Obliterating the Traces of Bodies of Jews Killed by the Einsatzgruppen, Affidavit,” NO-3947 in Yitzhak Arad, Israel Gutman, and Abraham Margaliot (editors), Documents of the Holocaust: Selected Sources on the Destruction of the Jews of Germany and Austria, Poland, and the Soviet Union (Eighth Edition) (University of Nebraska Press and Yad Vashem, 1999), pp. 471-473.

[6] A. Anatoli (Kuznetsov), Babi Yar: A Document in the Form of a Novel, translated by David Floyd (Farrar, Straus and Giroux, 1970), pp. 16, 17. Kuznetsov wrote Babi Yar under the pseudonym A. Anatoli. Although it was a memoir, calling it a “novel” made it possible for it to be published in the Soviet Union, but even so it was highly censored. Kuznetsov defected to the west in 1968 and died in 1979. As of 1970, Babi Yar has been printed in the west in an uncensored version under his full name, A. Anatoli Kuznetsov.

[8] You can easily prove this for yourself. Go to http://www.deathcamps.org/occupation/babi%20yar.html. Find the “GoogleEarth Photo” on the left side (about the middle of the page). Right click on the image which shows the same photo with the ex-ravine drawn on the map.