How was it possible for Anne Frank, her family, and their friends to hide in the Secret Annex for 25 months without being discovered?

The Franks and their friends, who were hiding in the Secret Annex, would have been discovered long before 25 months elapsed.

For example, in 1982, Robert Faurisson, a French Holocaust denier, called the Frank’s hiding place “a glass house” in which neighbors would have easily seen the Franks and their friends.[1] Further, he claimed that the “swinging cupboard” was an “absurdity”; in his view, others not only would have noticed its installation, but also the “oddity” of its location. Faurisson suggests that there was only “the least possibility of a really secret life in those premises.” Such “improbabilities, incoherencies, and absurdities” mean that Anne’s diary could not be “in any way authentic.” Instead, he asserts, it is a “literary fraud” and should be “placed on the already crowded shelf of false memoirs.”[2]

There is no reason the inhabitants of the Secret Annex could not have hid for 25 months without getting caught. They made sure not to make noise when anyone else was in the building. Their protectors and the design of the annex also helped them remain hidden.

The facts about life in the Secret Annex:

When Holocaust deniers, like Faurisson, claim that those in the annex would have been heard by neighbors and office workers, they actually use Anne’s diary as a main source. Faurisson, for instance, listed every small noise that Anne mentions in her diary. As an example, he notes that on August 5, 1943, Mrs. van Daan used a vacuum cleaner at 12:30 in the afternoon. In his view, this activity would have easily gotten them caught. Faurisson’s reading, however, purposefully ignores the fact that Mrs. van Daan only started vacuuming during the office workers’ lunch hour. As Anne’s diary states, the “whole gang breathes a sigh of relief” because the warehousemen “have gone home for lunch.”[3]

The Franks and their friends did fear that people in the office or in the buildings adjoining 263 Prinsengracht would hear them and, therefore, they took precautions. They strove to be utterly silent from 8:00 a.m. to 6:00 p.m., when the business downstairs was open. They made no deliberate noise until one of their protectors gave them a signal that the building was officially empty. Anne wrote how much she disliked “having to sit all day and not say a word . . . On ordinary days we have to speak in a whisper; not being able to talk or move at all is ten times worse.” (October 1, 1942)

Despite their best efforts, the Frank family and their friends did have several close calls. On one occasion, two neighborhood youngsters, who knew the warehouse had valuables, broke into the building. While in the warehouse, one of them later noted: “I suddenly heard the toilet being flushed. The pipe ran down the back just like in our house. I therefore understood immediately that there were people in the building and thought: ‘Let’s get out of here!’ We didn’t say anything about this. We were used to keeping our mouths shut because periodically we also had somebody in hiding at our house.”[4] This situation, like others Anne writes about, shook the Franks and their friends to the core. Anne writes about how they often felt like they would be caught.

Where the annex was located, in 263 Prinsengracht, was really two separate houses sharing a common warehouse space. This warehouse extended from the very front to the back of the entire building. From the street and canal, there is, however, no visible indication of a separate back portion to the house, where the annex was located. There are, however, windows in the annex that look out onto a courtyard area. This courtyard is surrounded by a block of houses, the backs of which share this common space.

Holocaust denier Robert Faurisson claims that those hiding in the annex used electric lights and candles that would have been seen in the courtyard. Contrary to his interpretation, when the Frank were hiding there the windows in the back part of the building (the annex area) were covered with curtains. The Franks and their friends took care to keep these windows covered to avoid suspicion. Anne records this herself: “. . . at eight o’clock we all trooped downstairs through the hall in pitch darkness . . . to the alcove. We could switch on the light, since this room didn’t have any windows.” (December 7, 1942)

The entrance to the annex was accessible only through the private office of the director, Victor Kugler, who was one of the Frank’s protectors. The annex was hidden by a movable bookcase/cupboard that camouflaged its only entrance. Any visitors to the business were never admitted any further than Kluger’s office. Thus, people entering from street level could not directly access the staircase that led to the annex unless they went through Kugler’s office. Another of their protectors, Johan Voskuijl, built the movable bookcase. The installation of the bookcase would not have been observed by anyone who didn’t already know the annex was there.[5]

Further, the bookcase is not a visible “oddity.” There is no indication that it is out of place. The room looks like a space for keeping rarely needed business records and other items; therefore, the bookcase is a fairly natural furnishing. There is no reason to believe there is a room behind the bookcase unless you were very familiar with the house or had a copy of the floor plan. The effectiveness of the bookcase was noted in Anne’s diary on April 11, 1944:

Ten o’clock, footsteps on the stairs. Father, pale and nervous, came inside, followed by Mr. van Daan. ‘Lights out, tiptoe upstairs, we’re expecting the police!’ . . . We thought of nothing, but simply sat there in pitch darkness . . . no one moved a muscle. Footsteps on the stairs, then a rattling at the bookcase. This moment is indescribable . . . A shiver went through everyone’s body, I heard several sets of teeth chattering, no one said a word. 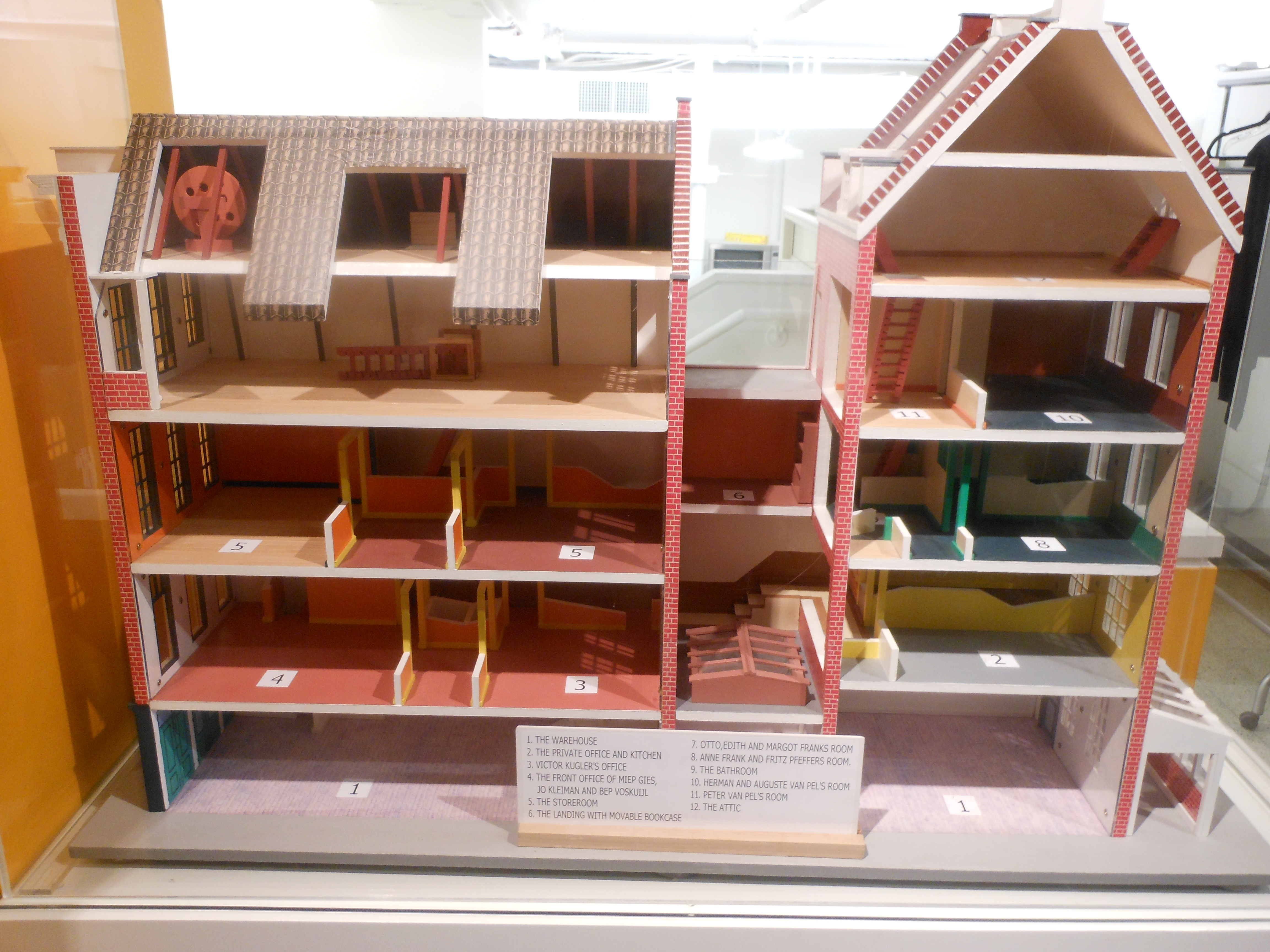 Eventually, the intruders left without discovering the secret of the bookshelf. This is a testament to its natural presence in the little room. When the Franks were arrested, the police came directly to the bookshelf door because their informant provided them with an exact location.

Clearly, life in the Secret Annex was dangerous and precarious but several factors—the layout of the house, their protectors, and their caution—made it possible for the Franks and their friends to remain hidden for 25 months. It lasted until August 4, 1944, when their luck finally ran out.

The residents of the annex took great care to be quiet and tried to give no sign that they were hiding there. Only when the office staff left the building in the evening and on the weekends were they able to resume a slightly more “normal” life. They were still very careful about lights and noise.

Curtains covered the windows to the courtyard and a movable bookcase camouflaged the entrance to the annex. In spite of their precautions, they had several close calls. Similarly, it is apparent that at least some of the neighbors knew people were in the annex. For whatever reason, they chose not to turn them in. Whoever betrayed the Franks appears to have had no such reservations.

For the reasons enumerated above, Faurisson’s position—that the Franks and their friends would have been caught immediately—is not supportable.

[2] Robert Faurisson, “Is The Diary of Anne Frank Genuine?”

[3] All diary quotes are taken from the Anne Frank: The Diary of a Young Girl (Definitive Edition), translated by Susan Massotty, edited by Otto H. Frank and Mirjam Pressler (Bantam Books, 1994).