Introduction: What Was Operation Reinhard?

What was Operation Reinhard?

Operation Reinhard was the code name the Nazis gave to the three death camps of Treblinka, Belzec, and Sobibor. Unlike Auschwitz-Birkenau and Majdanek, which were a combination of extermination and labor camps, the Operation Reinhard camps were purely extermination facilities. All three camps were located in southeastern Poland, close to major Jewish population centers and ghettos, such as Warsaw and Krakow. These camps were also easily accessible by train lines that ran to those population centers. The Operation Reinhard camps were under the authority of Odilo Globocnik, whose headquarters were in Lublin, Poland. Belzec was the first camp to be built, followed by Sobibor and finally Treblinka. Belzec was opened in March 1942; Sobibor opened in mid-April 1942; and Treblinka opened in July 1943.

What was the method of murder in the three death camps?

In Treblinka, Belzec, and Sobibor, the primary method of killing was gas chambers. Victims were locked inside the chambers and large engines pumped exhaust fumes into them. The victims were killed by a combination of carbon monoxide poisoning and suffocation from lack of oxygen.

The layout of the camps:

In general, all three camps were divided into three sections: the administration area, the reception area, and the extermination area.

The reception area was next to the railway line. There was an open assembly area surrounded by barracks. At these barracks, Jews were stripped of their clothing and possessions. The possessions were stored at this location until they could be shipped to Germany, where they would serve the Nazi war machine.

The reception area was connected to the extermination area by a long “tube” or “Schlauch.” The tube was fenced on both sides and the view into or out of the tube was obscured. Guards drove naked Jewish victims through the tube, at the end of which there was an opening. The gas chambers and mass graves were located at this opening.

The camps were surrounded by multiple fences and guard towers. Trees and embankments sheltered the view of the camps from locals or passers-by, whether traveling on road or rail. 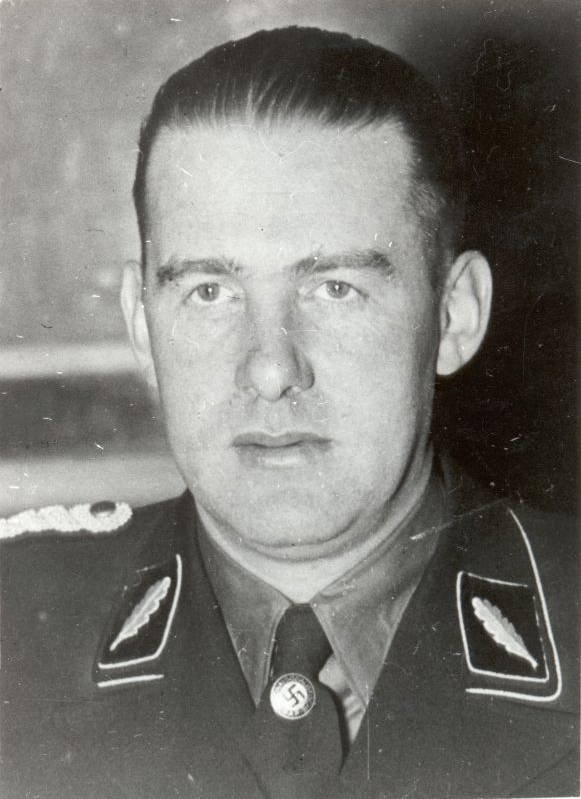 The importance of deception:

The ultimate purpose of the camps was an elaborate fiction. The Nazis and their collaborators made a strong attempt to deceive the Jews about their fate, at least until they were locked in the gas chambers, where they were helpless and unable to resist. At Treblinka, the ramp looked like a real railroad station with signs, a clock, and a ticket window.

The process of murder:

After a section of boxcars had been moved onto the ramp, the Jews were unloaded and told to leave their luggage by the train. They were marched into the reception area where they were given a speech by one of the Nazis. The Jews were told that they were being sent further East to work and that they would be able to stay with their families. Then, they were told that their bodies and their clothes needed to be disinfected for hygienic purpose. After a shower, their luggage, clothing, and valuables would be returned to them.

New arrivals were separated into two groups: (1) men, and (2) women and children. In Treblinka and Belzec, each group undressed separately in different barracks. However, in Sobibor, the men had to undress outside while the women and children were allowed to undress in a barrack. They were told to leave their clothing where they could later find them.

First, the group of naked men was driven into the tube (the “Schlauch”), which was guarded by Ukrainians with dogs. They were then driven into the gas chamber in the extermination area. The women and children followed later, after they had their hair cut off.

Meanwhile, the Bahnhofskommando (ramp Jews) cleaned the boxcars and removed any dead bodies or luggage. The Nazis took the luggage, clothing, and valuables, which were later sorted and shipped to Germany.

Once one group of arrivals had disappeared into the tube, the empty boxcars were pushed out of the camp and another set of full boxcars moved in. This process was repeated until the entire transport was exterminated.

The Nazis selected some Jews from the transports to work in the extermination camps. In the administration area, Jewish women worked as maids and cooks for the SS. Jewish males worked in various trades needed for camp operation.

In the reception area, Jews were selected to work with the arriving Jews on the ramp. The Nazis forced them to work in the undressing process; the cutting of hair; removal of possessions; and cleaning the ramp after each boxcar arrival. Later, the Nazis assigned some Jewish men to cut the wood used for camouflaging the camps. Some of this wood would eventually fuel the cremation pyres.

In the extermination area, the Nazis assigned groups of Jewish men to remove the bodies from the gas chambers and transport them to the mass graves. In an attempt to hide every trace of the mass murder, the Nazis would later force these groups to exhume, cremate, and rebury the ashes and bones. There was no contact between Jews working in separate areas. The death camp Sonderkommando (Jews working in the extermination area) were murdered at regular intervals and buried in the mass graves. Others among the new arrivals regularly replaced them.

In rare cases, Jews were selected for work in labor camps in the area. Jews working in nearby labor camps waited in the reception area until the train was cleaned and then departed for the labor camps on the train. They never knew or saw what was happening in the extermination area. Jews working in the reception or administrative areas also did not know, at least from direct observation, what took place in the extermination area.

The gas chambers themselves looked like bathhouses and were marked with Jewish symbols. In Treblinka, there were plants and flowers by the steps leading up into the chambers. Each gas chamber had a gas-tight entry door, which led into the hall. Once this door was locked from the outside, the victims were helplessly trapped. The entry doors had a small peephole to see if the occupants were, in fact, dead. On the opposite side of the entry door, each room also had garage-type doors that were opened to remove the bodies. From here, they were moved to the mass graves.

In the beginning, the graves were dug by hand. Later, the Germans used excavators to dig larger pits. Using excavators sped up the digging process. The bodies were covered with lime and, when a grave was full, it was completely covered with dirt. Another grave was promptly dug.

The burning of the bodies:

At different intervals between 1942 and 1943, the bodies of already murdered Jews were exhumed from the mass graves and cremated on large grills. The Nazis then reburied the ashes and bone fragments in the pits. This took place at each of the camps. Shortly after this exhumation process began, all three camps switched their strategy for disposing of recently murdered victims. Instead of burying the bodies, exhuming them, and then cremating them, the Nazis started immediately cremating murdered victims.

The razing of the camps:

After the majority of the bodies had been cremated and the transports ceased, all three camps were dismantled. All the buildings and structures were torn down, the mass graves were covered over, the fences were removed, and the area was sanitized. The sites were then completely abandoned.

There were only a handful of survivors from all three camps, mostly due to prisoner uprisings that allowed for several Jews to escape. At Treblinka, there were about 70 Jewish survivors. At Belzec, only two Jews survived. Only one of the two Belzec survivors, Rudolf Reder, remained alive to testify after the war. At Sobibor, there were about 47 Jewish survivors. More survivors emerged from Sobibor and Treblinka because Jewish laborers revolted and escaped in both locations (Treblinka, August 1943; Sobibor, October 1943).

The number of Jews murdered in Treblinka, Belzec, and Sobibor:

Most of the victims were Polish Jews from two districts: (1) the Generalgouvernement districts of Warsaw, Radom, Krakow, Lublin, and Galicia, and (2) from the Zichenau and Bialystok districts, which had been annexed to Nazi Germany. The remainder came from Germany, Austria, today’s Czech Republic, Slovakia, Macedonia, France, the Netherlands, Lithuania, and Belorussia.

Between March 1942 and October 1943, an estimated 1,400,000 Jews were murdered in Treblinka, Belzec, and Sobibor. Only an infinitesimal percentage were selected for labor duty, whether within the camps themselves or in nearby labor camps. It is estimated that the number of Jews murdered at Treblinka was at least 713,555; at Belzec, at least 434,508; and at Sobibor, at least 170,165. These figures are probably low, as not all transports are known. A generally accepted total figure is 1,400,000.

Despite the Nazis’ attempt to remove all evidence of mass murder, many important and critical traces remained of the camps. The traces clearly highlight the function of the camps. For example, the mass graves at Sobibor and Belzec have been located. There are, however, no intact buildings or visible remains of the camps. Aerial photographs and modern excavations have provided information about the layout of the camps. The sites today are grassy and sandy areas covered with trees. All three camps now have memorials with small museums. 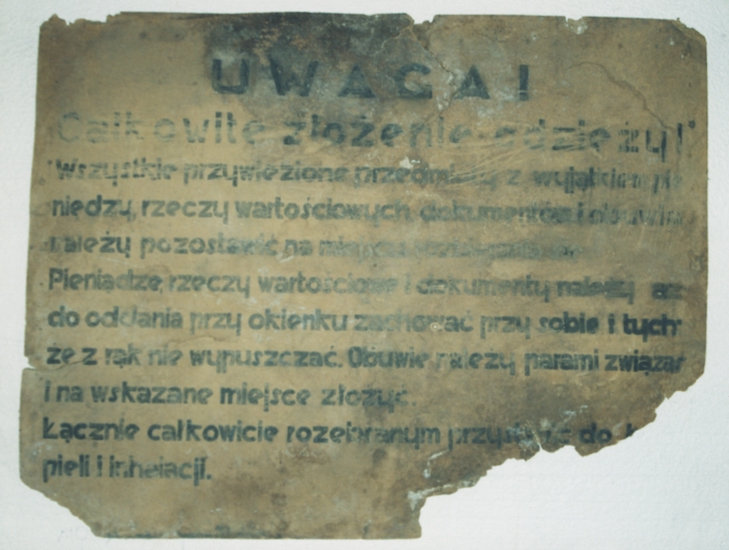 A sign in Polish from the Belzec killing center that reads, “Attention! All belongings must be handed in at the counter except for money, documents and other valuables, which you must keep with you. Shoes should be tied together in pairs and placed in the area marked for shoes. Afterward, one must go completely naked to the showers.”